This year Four Corners is proud to be a sponsor of the fifth season of the Alabama Backroad Century Series. The series promotes the growth and development of long-distance cycling in Alabama, encourages participation in established Alabama century (100 mile) rides and recognizes and rewards individuals for their accomplishments. In addition to cycling opportunities, the events promote awareness and provide an important funding source for various charitable causes across the state. The series started in April and will last into November. Hundreds of cyclists from across the state and the country participate in the series each year.

Five winners selected at random from cyclists who complete a full distance century will receive a personalized custom framed piece from Four Corners Gallery. “As far as we have seen, no other state offers a cycling series quite like this,” said Pixie Hicks, series director. “I believe our success is the result of recognizing and rewarding individuals for their accomplishments.” There will be one winner from each of the following centuries: Cheaha Challenge & Ultra, TriStates 100, W.C. Handy 100, Birmingham Bicycle Club’s 44th Annual Century, and Glassner Autumn Challenge. The framed piece is a unique custom-designed and framed shadowbox with a photo of the winner, the collectible Centurion Finisher’s Medal awarded for the century completed, and an actual bicycle chain. 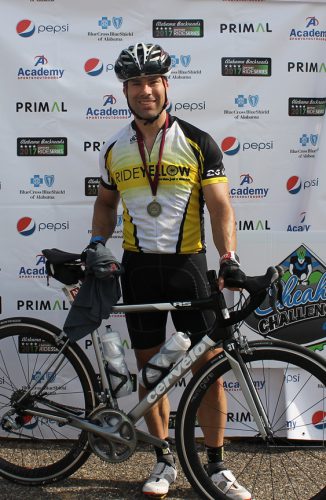 We have two winners already this year!

Kudos to Don Mrozcko, our winner for the Cheaha Challenge & Ultra on May 21. The appropriately dubbed Cheaha Challenge is a demanding route over Mount Cheaha, the highest point in Alabama, that continues to fulfill the event’s tagline promise to be “the toughest ride in the South.”

Congratulations to Sterling Catterton from Arkansas, our winner for the TriStates 100 on June 3. The TriStates 100 is held annually in Dothan and benefits the Dawn Pitchford Fund of the Children’s Hospital of Alabama. Proceeds for the fund help with non-medical needs of children across the state with cancer such as travel expenses, pajamas, stuffed animals, and head wraps. 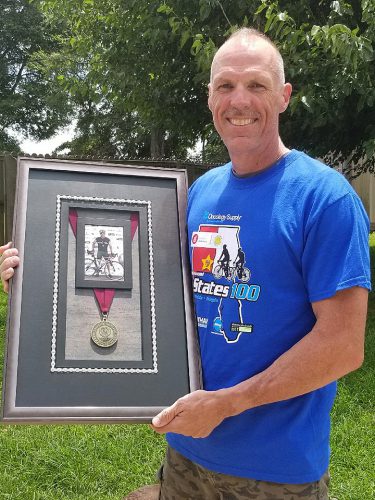 The upcoming WC Handy 100 is near scenic Florence, Alabama on July 22. The ride is part of the WC Handy Music Festival, a week long celebration of the life and music of the Florence native known as “Father of the Blues”. The festival features music by both local and nationally-known performers.

The Birmingham Bicycle Club’s 44th Annual Century will take place on September 30 in Ashville. Proceeds from this years event will be directed to the UAB Comprehensive Cancer Center for melanoma research and awareness. The club made this decision in reaction to the ride director, Wayne Spooner, being diagnosed last year with melanoma.

The Glassner Autumn Challenge will be held in Montgomery on October 14. This ride is held in memory of Dr. Jim Glassner, a long time friend and supporter of cycling in central Alabama. The ride supports Montgomery Bike Club Cycling Safety Classes, Cycling Awareness Activities, and Bike Month.

The Alabama Backroad Century Series has thirteen independent centuries. The Cyclepaths Challenge last April in Monroeville is a benefit for Camp Smile-A-Mile with its efforts to provide support to families with children fighting cancer. Also in April were the quickly growing 3rd annual Tour Autauga in Prattville, and Tour De Blue’s 10th annual ride to benefit the Urology Health Foundation. The 3rd Annual Spring Krusher in May is a new ride in the series in Elkmont and will benefit the counseling program of the Family Services Center, Inc. Cycling for Sight will be in Montgomery on June 24. This ride commemorates Helen Keller and benefits Montgomery Lions Club Community Foundation charities and the Ability Post Network at Huntingdon College. Now in its fourth year, the North Jefferson Century will be in Gardendale on August 26 to raise awareness and funds for the International Foundation for CDKL5, a rare neurological disorder. Gears & Beers: Bayou 100 will be in Mobile on November 11 benefitting the Delta Bike Project, a community bike shop in Mobile that teaches basic bike maintenance and repair skills.

The series has a new addition this year: the “Out-Of-State Invitational” Fenner Ride in Milton, Florida. This established ride will introduce Alabama Rides to Florida neighbors and boost participation in the event, which benefits Big Brothers ands Big Sisters of Northwest Florida. A goal of the addition is to serve as an example to inspire surrounding states to start their own series.